How to Avoid Workman’s Comp in Commercial Linen Collection

Traditional linen carts force workers to place additional strain on the back, knees, shoulders and muscles creating the potential for musculoskeletal injury.

Few people enjoy doing the laundry. But, are towels and linens a big material handling and workman’s comp issue? The answer depends upon your perspective. For most people, taking a few towels and linens to the laundry room causes little or no strain. This situation is much different for large institutions such as hospitals, hotels, and even college campuses where the amount of dirty items increases exponentially. These facilities move laundry items that add up to thousands of tons annually.

For example, one hospital in Oklahoma processes more than 5.2 million pounds of clean and dirty linens every year. The five employees responsible for linens pushed or pulled about 60 carts daily weighing up to 700 pounds each. For the year, each employee moved approximately 1.1 million pounds (561.5 tons) in carts not designed prevent significant ergonomic injury.

These material handling and ergonomic issues are areas of concern. Most facilities transport clean and dirty linens on a large, wheeled cart. While the cart offers the ability to load significant amounts of linen to move from one location to another, the increased weight combined with a variety of inclines and surfaces caused unintended problems.

The majority of carts used to gather and distribute linens look like a square box on wheels. The cart’s center of gravity is low to the ground and becomes heavier as the linens are collected. This configuration adds to back problems, as workers must bend in an awkward position to push/pull the cart. Maneuvering corners also adds to potential injury from improper spinal rotation as workers bend in an unnatural manner as they look to avoid other obstacles while still pushing the cart. The list of potential injuries from pushing/pulling linen carts goes beyond back issues. Other prominent injuries include tears in shoulder muscles along with wrist and finger damage caused from attempting to turn and control the cart. The cart was a solution to improve the collection of linens. However, it now adds to the cost of workman’s compensation insurance and medical expense. Fortunately, a solution is available that combines the benefits of large-scale linen collection with improved ergonomics and worker safety. 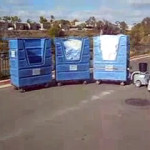 Enter the Pony Express 1065 Electric Tugger. This unique hauling system works with any MOD72P series linen bin or an equivalent. The tugger easily moves linen carts from one location to another using easy controls located on an adjustable arm. Its ability to tow multiple linen carts at one time increases efficiency. However, the most important aspect of the Pony Express is the savings that comes from the elimination of medical expenses and workman’s comp claims associated with pushing/pulling these carts.

Here at Electro Kinetic Technologies, we deliver solutions for the safe and efficient transport of items for many industries including institutional laundry applications. Learn more about the Pony Express 1065 Electric Tugger or request information on custom solutions by contacting us today.